So the last time I wrote, I told you all how I felt about going home for the first time in a year and a half. And rather than tell you all how it went, I’ll just say it was GREAT! Some things just can’t be summed up in words, but I will hold the memories tight. What I will instead choose to direct my energy and writing towards is something that needs attention drawn to it. Welcome! To the blog post where I RAGE OUT towards an inferior airline and poor excuse of customer service. Sorry United Airlines, but you get my hatred tonight.

The saga begins with me sitting down at my gate at United Airlines, 61B, a number now burned into my cortex, and settling in for an hour while my flight gets in. I notice on the screen above my terminal that the city still says “Washington,” which was the flight before my flight. I ignore the quite obvious error, dismissing the detail as a delayed update. After thirty minutes of the city not having been changed, I walk over to the departures screen 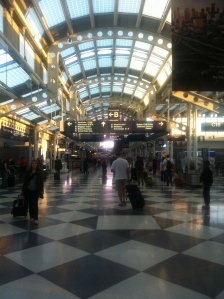 Like a swell of ocean water smashing against the rocks, the full reality of my situation slams into me as I pick a bench without armrests near an outlet. This is my home for the

next 19 hours. At least I have a laptop with hours of media content! This was true. Some relief. I grab my charger and my heart sinks for what seems like the thousandth time. It’s a New Zealand charger. Whatever battery power I had left was all I had. For some reason I had my American charger for my phone. It was a few hours before I had the idea to delete all my music on my phone and load the videos into my phone. Not ideal, but doable. I threw a blanket over my head, put in my headphones, and passed time as I watched the suns trajectory pass over the window.

Two hours before my flight, I headed to the international terminal, which turned out to be a ten minute walk with my two bags. Literally…..the only good news in this day was that I found a bag cart, which usually costs money, and carted my bags to the AirNZ terminal. Once there, I was greeted by the most amazing customer service rep. I nearly hugged her and cried. I walked to my AirNZ gate and used both my meal vouchers for dinner. No beer has tasted sweeter, no fry more perfect, no burger so succulent. After I was well fed, I sat in a starkly different waiting scenario. You see, unlike United, who has planes frequently late to the gate, understaffs their gate service centres, and staff who would rather be testing decommissioned land mines than doing their job, AirNZ staff are always happy to help, well dressed, well staffed, and extremely polite. Oh yeah, their planes almost always leave on time. “Will the following passengers please come to the main desk for seating arrangement upgrades. Jill Singer and Eric Peterson.” What? This is awesome. Things are looking up. I arrive at the desk and she asks for my passport and boarding pass. I throw my hand into my back pocket. Nothing. Coat pockets. Nothing. I open my bag to check the back pocket. Nothing. No. My hearts sinks….again. I left it in the security check. The lovely lady escorts me to the security check. The entire time I am picturing having to get an emergency passport, calling people, paying money, on and on the scenario goes. This can’t be happening! I was safe! I was out of HELL! I was so close. My flight was in less than an hour. Literally as I am walking into the security area, there is a man holding a passport open to the picture page. He looks at me, and I frantically ask him, “Is that mine?!” He nods. “I’ve been paging you for hours.” (I swear I never heard one page). I grab the passport and my anxiety lifts like a helium balloon.

I am upgraded to an aisle seat, SCORE. And boarding begins. I enter the plane and begin the 14 hour journey back to Auckland. I couldn’t help but take a hippie shower in the airplane bathroom after recounting the truly unbelievable journey I had getting me to this plane. Smelling like two-day old man, wearing the same shirt, pants, socks, and shoes…I return to my seat to eagerly drift into a long-awaited unconsciousness. I’d like to say that I literally kissed the ground on my arrival, but instead I took a very deep breath in and smiled. It was good to be back. *DISCLAIMER* Events happened exactly as they were told. Characters names are true and their behavior is unfortunately not fictional. This is an original story told by Eric Peterson.

2 thoughts on “Purgatory of Failure: My Unbelievable United Airlines Saga”

This site uses Akismet to reduce spam. Learn how your comment data is processed.

I'm a writer and this is my medium for life. I am also an American Christian male Social Worker who lived in New Zealand for 3 years and is now back Stateside living in Colorado. Simple.

Search Within This Blog

Best of the Blog

You are loved. If no one has told you this, know that you are. We are in this world for but a moment, live in love.
%d bloggers like this: